The Texas Department of State Health Services (DSHS) published abortion statistics for 2016, the most recent year of data available.  This newly-released data marks the lowest annual number of abortions in Texas since 1977.

Although Texas Right to Life celebrates that 459 fewer abortions were reported in 2016 than in 2015, we lament that the number has yet to reach zero.  Despite the abortion industry’s predictable and well-funded opposition to every Pro-Life measure in the Legislature and in the courts, Texas is moving in the right direction, saving more lives from the inhumane and torturous injustice of elective abortion.

One factor in the decrease is the Judicial Bypass Reform, a measure that stopped the abortion industry from circumventing parental involvement when a minor seeks abortion in Texas.  The DSHS report shows a drop in abortions obtained by minors, indicating that pregnant teens are not being ushered through the court system by abortion clinic lawyers as expeditiously as in the past.

Notably, 76 babies of Texas residents in 2016 suffered painful late abortions after five months of pregnancy, which shamefully include children suspected to have a disability.  Texas Right to Life and Representative Matt Schaefer (R-Tyler) first introduced an amendment in 2015 that would have closed the loophole in Texas law that put children with disabilities at higher risk for discriminatory abortions.  However, liberal Republicans killed the measure in 2015 and again in 2017 that would have protected these children.  In the 2019 86th Session of the Texas Legislature, the Preborn NonDiscrimination Act (PreNDA) will be filed to eliminate the loophole; protect babies throughout the entire pregnancy from discriminatory abortions based on race, sex, or ability; and provide life-affirming social and medical alternatives for parents whose preborn child is diagnosed with a terminal illness.

Because the enforcement of several Pro-Life laws was in legal flux throughout 2015 and 2016, Texas Right to Life feared that abortions would continue an upward trend.  Since the passage of the Pro-Life Omnibus Bill (House Bill 2) in 2013, enforcement of the law has been sporadic, dependent on the most recent court order in the protracted lawsuit.  The Supreme Court of the United States struck down portions of HB 2 in June 2016, nullifying several protections passed by the Texas Legislature.  The intermittent enforcement of HB 2 in 2015 led to an increase in abortions.  This small but alarming uptick in abortions in 2015 broke a decade-long downward trend of abortions in Texas.  Thus, the 2016 decrease, though modest, is worth celebrating. 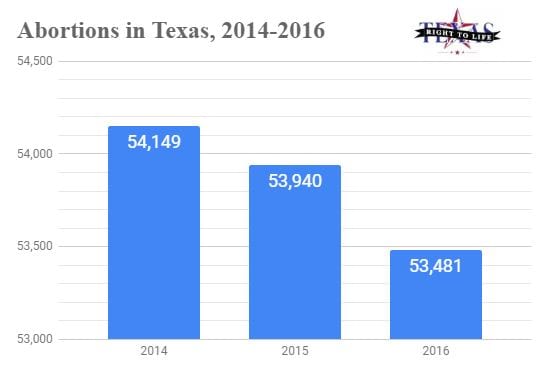 Although DSHS has not yet released the birth rate in Texas during 2016, so as to calculate the abortion rate, the steady decrease in abortion is of more significance amidst the boom in population, greater than that of any other state according to U.S. Census estimates.

Nevertheless, 53,481 babies were still lost within Texas to abortion in 2016.  The Pro-Life movement cannot turn a deaf ear to the cries of these helpless victims, especially the most vulnerable among them who die simply because of suspected disability or abnormality.  The decrease further proves that Texas Right to Life’s incremental and prudent strategy to save lives and overturn Roe v. Wade is working to change hearts, minds, and laws about the dignity of every human life—born and unborn.