Good news for Pro-Life and preborn Texans comes from the Republican Party of Texas Convention being held in Dallas last week.  The Party has taken a hard line on Pro-Life issues for 2016, including adopting language favoring a Dismemberment Abortion Ban – a bill passed by five other states and a measure Texas Right to Life considers a Legislative Priority for the upcoming legislative session.  Pro-Life delegates to the convention showed considerable support for the measure by voting for this specific plank in a convention general session Friday evening.  90% of the voting delegates voted to add the Dismemberment Abortion Ban plank in the Party’s 2016 Platform.  Convention attendees also showed their support by signing a petition for the Texas Legislature to pursue codification of a law protecting the preborn in the next Texas Legislative Session.  As well, Texans are showing support for the protection of tiny Texans from dismemberment abortion on social media with the hash tag #DismemberRoe. 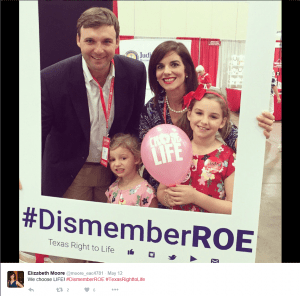 Texas Right to Life Legislative Director, John Seago, attended the Republican Party of Texas Platform Committee meetings, monitoring actions and testifying in favor of the ban.  Seago shared valuable data on the incidence of dismemberment abortion and the state interest in codifying a Dismemberment Abortion Ban.  The committee agreed, adopting the Dismemberment Abortion Ban as a plank in the Pro-Life platform. 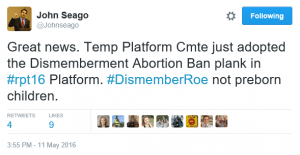 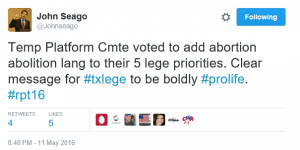 In addition to strongly backing the Dismemberment Abortion Ban, the committee favored language expressing the Party’s determination to “abolish” abortion, and rejected an attack on crucial patient protection language.  The Party reaffirmed opposition to the draconian Texas Advance Directives Act, a 1999 statute allowing doctors and hospitals to remove Texans from life-sustaining treatments against their will or that of a surrogate.  Instead, the Party’s official stance commits to preserving patient autonomy and the Right to Life.

These victories affirm the power of grassroots conservatives rejecting compromise and exceptions on crucial Life issues.  Texas Right to Life commends the Republican Party of Texas for hearing and heeding the voices of constituents, delegates, and convention attendees, and for boldly and swiftly holding non-compromising Pro-Life language.