Trending
You are at:Home»News»Issues»Abortion»Reality Check: Most Abortion Facilities ARE in Communities of Color

Sometimes a fact check could use a reality check, especially before being published.

An article produced on July 11 by the left-leaning Black Entertainment Television website claims the overwhelming correlation of abortion mills located in communities of color is mere myth, but the data tells a different story.

“It’s not a secret that Black women have higher abortion rates than women of other races…,” they say, as they proceed to undermine the actual amount of killing centers in these communities. While that is unfortunately accurate that 41.2% of all abortions are committed on black women and babies, BET continues to state the notion that this is a result of strategic targeting is “just not true.”

So what makes BET so confident? The entertainment behemoth claims the “unbiased findings” of the Alan Guttmacher Institute (Planned Parenthood’s research arm) hold the answer.

But perhaps their data could still be accurate in spite of bias, right? Not in this case. The research published by Guttmacher) cited as proof no correlation between race and abortion facility location. In actuality, they stated, location has nothing to do with ethnicity and abortion. In fact, the word “race” is not mentioned in a single paragraph of the 12-page report; yet, Planned Parenthood Federation of America Vice President of External Medical Affairs, Dr. Vanessa Cullins says “you can trust this information.”

Reality check: no you can’t.

Planned Parenthood’s founder Margaret Sanger was notoriously racist. She sought to “cleanse” the human race of the “unfit” through abortion and contraception, targeting the African American population. Sanger wrote in a letter to Clarence Gamble on October 19, 1939, “The most successful educational approach to the Negro is through a religious appeal. We do not want word to go out that we want to exterminate the Negro population, and the minister is the man who can straighten out that idea if it ever occurs to any of their more rebellious members.”

Though the abortion industry adamantly denies its racist roots today, the pattern of prejudice can still be traced. Life Issues Institute  found 79% of Planned Parenthood’s surgical abortion facilities are located within 2 miles of minority communities based on the 2010 Census data. (You can trust this information.) 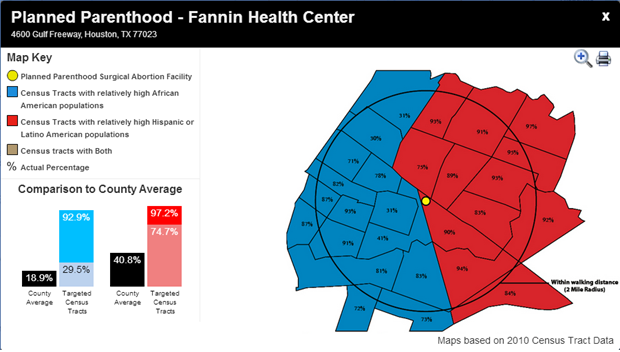 The correlation is clear. Even 75 years after Sanger began her “Negro Project,” her eugenic intentions thrive today. While minority women and children continue to be harmed by abortion at alarming rates, the abortion industry continues to shroud the facts in secrecy, but the truth cannot be hidden.

The facts are clear. Planned Parenthood targets black women and babies by infiltrating predominantly black and minority communities. The abortion industry then uses the media, the entertainment industry, and their base to promulgate their agenda, all in the name of health care.