Politicians always say they’re Pro-Life, but do they really defend your values in the Capitol?

Pro-Life Texans deserve to know the truth. That’s why our team of legislative experts made the Pro-Life Scorecard.

The Pro-Life Scorecard exposes whether or not your Texas state representatives and senators served preborn children, pregnant mothers, and vulnerable patients in the Capitol.

The scorecards are an objective evaluation of the actions a legislator took or refused to take for Life.

To calculate the scores of individual senators and representatives, Texas Right to Life analyzes votes in committee and on the floor, authorship of bills and amendments, co-authorship of priority bills, and public statements.

The 2021 Texas legislative sessions were a great victory for preborn children and a devastating loss for vulnerable patients.

The Pro-Life movement celebrates the Texas Heartbeat Act, which has saved thousands of lives and is the strongest Pro-Life bill in the nation to take effect since Roe v. Wade.

To match the increased number of women choosing Life because of the Texas Heartbeat Act, the Texas Legislature also increased funding for the Alternatives to Abortion program, funding adoption agencies, maternity homes, and pregnancy centers!

States across the country are replicating these achievements, which provide a model for the Pro-Life movement going forward.

However, formidable failures join these monumental triumphs. Neither the House nor the Senate passed the Pro-Life Priority that would eliminate the anti-Life 10-Day Rule (House Bill 2609 and Senate Bill 917) and stop hospitals from removing life-sustaining care against a patient’s expressed medical decision.

The same is true for the Pro-Life Priority that would have protected health care workers from being forced to participate in procedures (like abortion) that violate their beliefs (House Bill 1424 and Senate Bill 1674).

Along with the Pro-Life Scorecard, we also identified lawmakers who went above and beyond to advance Pro-Life Priority Bills and thus earned praise as heroes and champions in 2021. Conversely, some politicians thwarted life-saving policies and were named adversaries and disappointments.

Below, we outline our methodology for drafting the Pro-Life Scorecard and provide an overall summary. Scorecards for all Texas House and Senate members may be found here.

Because these issues were priorities, the floor votes on the bills (the first three issues) and amendment (the last) are worth 6 points. All votes on non-priority Pro-Life bills are worth 1 point.

Additionally, certain Pro-Life Priority Bills had a co-authorship requirement. These were bills that received significant focus from Texas Right to Life within the Capitol, wherein we continually encouraged members to sign onto these priorities, but didn’t receive a floor vote. Three bills fit this category: Senate Bill 917, House Bill 2609, and House Bill 1424. The co-authorship requirement is worth 6 points, the same as a floor vote would have been. Members who demonstrated support by voting for the bill in committee had this requirement waived.

Finally, the Pro-Life Scorecard includes penalties for authoring an anti-Life bill or amendment (legislation that Texas Right to Life publicly opposed) and for speaking against a Pro-Life bill on the floor. These penalties deduct 6 points for each category in the House and 8 points for each in the Senate. The penalties are greater in the Senate because Senators have a higher number of overall available points.

With these parameters and stipulations, each member receives an individually computed and tabulated score.

To find out who represents you, click here. View the Pro-Life Scorecard here. 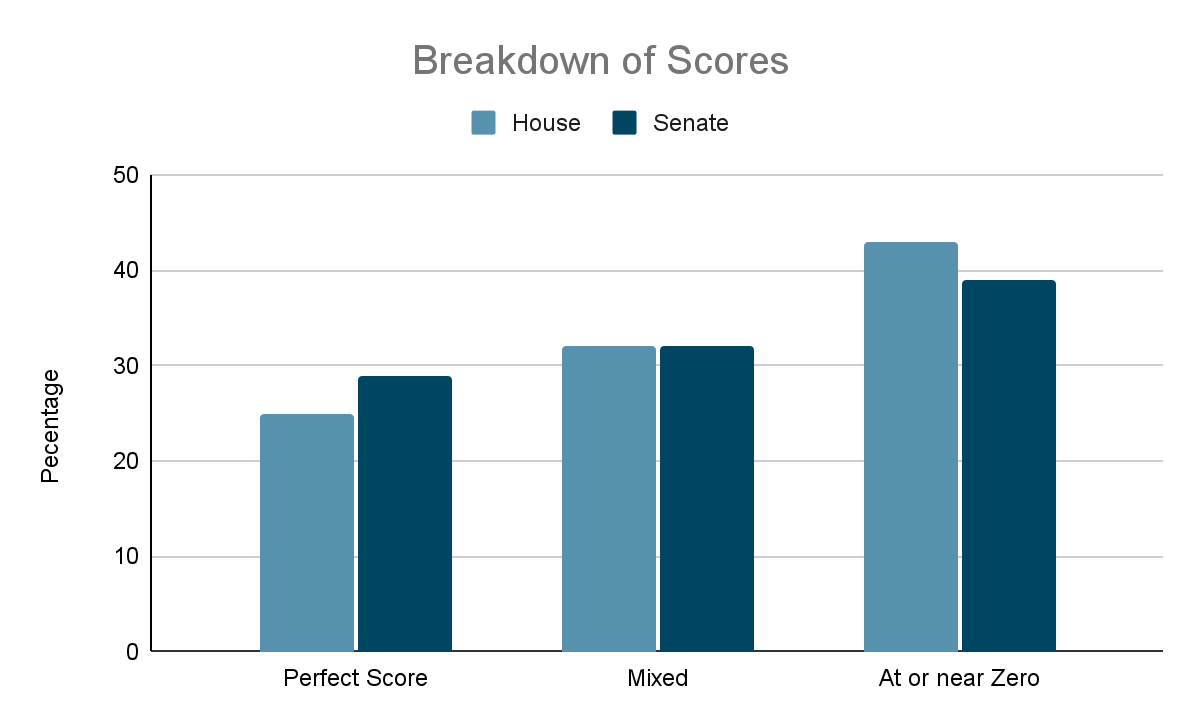 There are three broad groups of scores. First, many Republicans scored a perfect 100%. Thirty-seven representatives and nine senators met all of the requirements of the Pro-Life Scorecard.

Finally, a titanic majority of Democrats scored near or at 0%, illustrating just how much abortion has corrupted the Democratic Party.

Overall, the average score among all Texas House and Senate members is 52%, which is almost exactly the average a statistician might expect when the 87th Legislature accomplished half of the Pro-Life Priorities during their time at the Capitol. The Texas Legislature accomplished much for preborn children during their extended time in Austin. However, the State of Texas owes much more to the vulnerable patients and medical professionals who didn’t attract the same level of attention. In 2023, the 88th Texas Legislature will have another shot.

All scorecards may be found here. Make sure to check out your individual representative and senator’s scores to see how they stacked up to advancing your Pro-Life values!

I’m interested in including Texas Right to Life in my will.